Following its world premiere last September to massive fanfare at the 2018 IAA Commercial Vehicles Show in Hannover, the first eCitaro was handed over to Henrik Falk, chairman of the board at Hamburger Hochbahn AG, in the presence of Dr. Peter Tschentscher, Mayor of Hamburg, by head of Daimler Buses Till Oberwörder.

"Hamburger Hochbahn AG is one of the recognised pioneers for alternative drive systems in local public transport. In producing the new eCitaro, we have developed a well-thought-out and sophisticated urban bus concept which will make a decisive contribution towards promoting electromobility in towns and cities. We are delighted to be able to deliver the very first series production vehicle today," Oberwörder said.

Touted as the largest single order for electric buses from a German transport provider, the Hamburger Hochbahn eCitaro choice came after the company looked at several different concepts for urban buses with electric drive systems over a number of years, says Hochbahn.

Starting in 2020 Hamburger Hochbahn AG intends to purchase nothing but emission-free buses. It currently operates around 1000 buses on 111 lines. 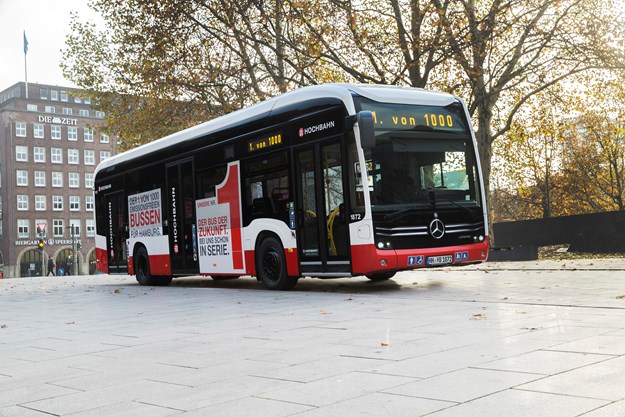 The Mercedes‑Benz eCitaro is the first fully-electric urban bus that has been developed and manufactured in Germany, says Daimler. Quiet and emission-free on the road, it is an important building block on the way to reducing emissions, particularly in cities and other built-up areas, it adds.

It features unique thermo-management, which is essential for electric buses, and it reduces energy consumption, which in turn increases range, it says. For example, an energy-saving heat pump heats the interior and heat-radiating components are connected to one another.

The modular battery packages’ total capacity is up to 243kWh. They are cooled to an ideal temperature in the eCitaro, which results in maximum charging, the highest usable capacity and a long life cycle, says Daimler. The batteries are recharged via a plug at the depot; they drive two electric motors at the wheel hub.

Hamburger Hochban’s eCitaro is a three-door version and features a comprehensive range of equipment with LED headlamps; LED exterior and interior lighting - including ambient lighting in the passenger compartment; a warning system for closing doors with a red LED light strip; a separate automatic climate control for the passenger compartment and cockpit ; and an Electronic Stability Program (ESP). 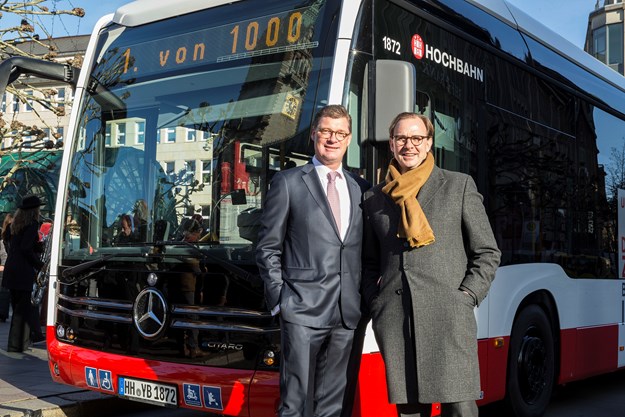 The eCitaro is based on the company’s best-selling Mercedes-Benz Citaro – which has had two generations and more than 50,000 sold. It is driven in almost all western and central European cities and on several continents, says Daimler.

The bus is available as a Citaro, Citaro hybrid and the Citaro NGT with a gas engine. The four-axle CapaCity bus for large cities is also a close relative of the Citaro.