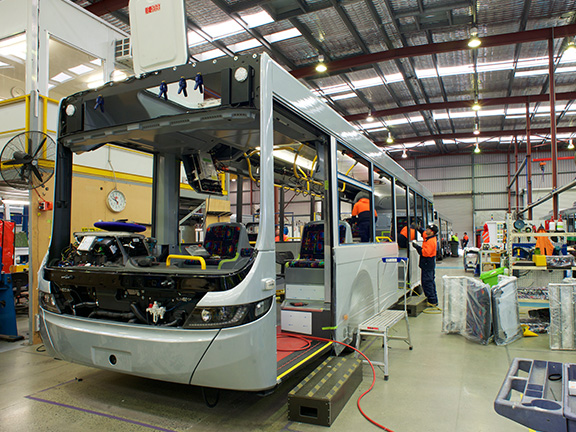 In an era during which Australia has watched the demise of the car automotive industry, it is both surprising and interesting that local bus manufacturing has not only survived but also grown.

One of the success stories in this field is Volgren, a Victorian-based company – now owned by Brazilian giant, Marcopolo S.A. – whose history as a bus body manufacturer spans 40 years.

Today, the company has facilities in Melbourne, Sydney, Brisbane and Perth, and it was at Volgren’s manufacturing centre in the Western Australian capital that I met with Volgren state manager Mathew Smith.

He recently oversaw delivery of 32 Volgren-built CAT buses to the Perth Transit Authority, part of a long-standing partnership that he believes has flourished thanks to strong collaboration and high-quality Australian design.

"Volgren buses are 100 per cent Australian designed and we use a high proportion of Australian componentry throughout the vehicle," he says.

"All the aluminium is sourced locally and a large amount of the plastics and interior fittings and finishes are Australian made."

The aluminium he refers to is, in many ways, the materials that sets Volgren apart. Indeed, it always has. 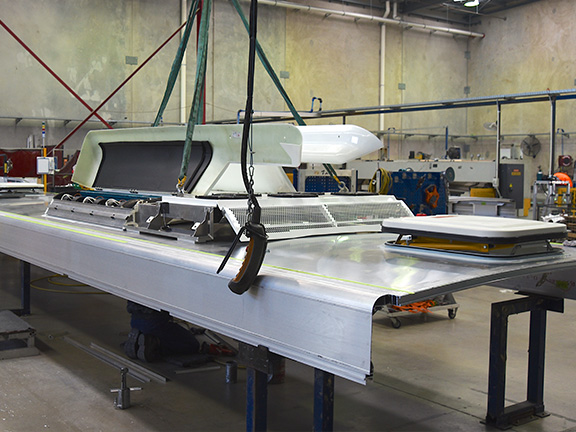 George Grenda, an enterprising businessman, founded the Grenda Corporation in 1945, purchasing six vehicles and four bus routes to operate in the eastern suburbs of Melbourne. In that first decade of the company’s operation, growth of the area and in the enterprise was immense.

Smith says Grenda and his family began to consider manufacturing in addition to the operation of bus routes when they realised what they wanted from a bus wasn’t available from existing vehicle companies.

"The Grendas came to the point where they had some pretty serious ideas about what they needed but they couldn’t find suitable buses on the market. They started to build vehicles to suit their own needs," he explains.

The owners began to consider ways to build a more reliable, comfortable, and cost-effective bus than those available at the time. In 1977 they were approached to be exclusive chassis distributors by Volvo in Victoria and areas of southern NSW.

The Grendas saw the Volvo chassis as the way of the future for the bus industry and a partnership was formed. The Volgren name was a merger of Volvo and Grenda.

At the same time, Volgren commenced its relationship with the pioneering Swiss company Hess, which had invented an extruded aluminium bus body system. During this time – and still now – most bus bodies were made of steel.

All Volgren models continue to be made with Hess aluminium technology to this day – a system known as Co-Bolt. 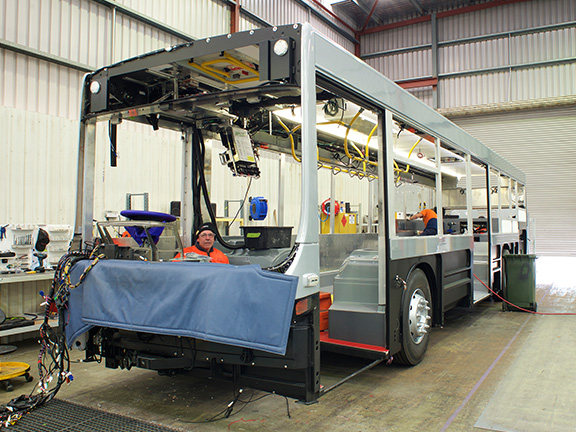 On a tour of the facility, immediately evident is the impressive factory flow process.
Smith explains each step and how Volgren had developed systems to ensure a safe and smart workplace.

Most of these efficiencies are due to the assembly flow process developed by Volgren for all its manufacturing facilities.
"It is a very simple system for being able to build any type or shape of bus quickly.

There are rolling Kanban trollies set up with all parts in kit format, pre-sprayed ready for assembly. Once a trolley gets used, it is re-filled, ready for the next buggy. We are embracing lean manufacturing throughout our plants.

"The advantage of this system is that, while previously a bus would be assembled and then go into the spray booth as a whole vehicle, by assembling pre-sprayed parts there is none of the usual climbing on platforms and masking processes needed to paint the vehicle. This reduces the safety risks in the workplace.

"All parts of our build process are refined to be ergonomically safe and smart, have a positive workflow and increase the safety of workers."

It seems this Co-Bolt system, combined with Volgren’s assembly flow process, has advantages in both build time for Volgren as well as the lifetime of the bus for the operators. 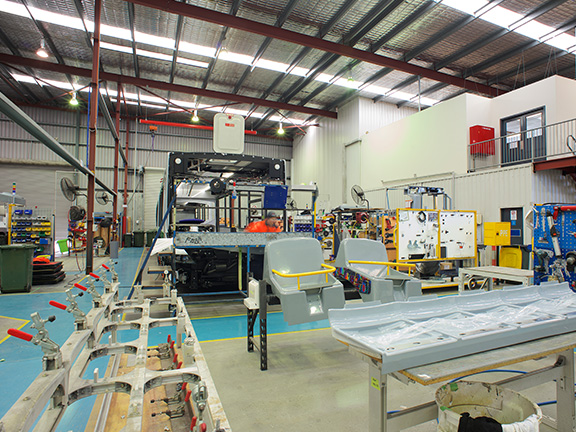 Made by bus people

While at the Malaga facility, I noticed a Volgren slogan that read "for bus people by bus people". I asked Smith what it means to the company.

"It’s very important because it gives an insight into where a lot of our design history has come from.

We were owned by the Grenda family and they operated many bus lines," Smith says.

"This enabled them to input a large amount of feedback and information into the start of the design process.

It provides a significant advantage to design the bus with a focus on the end user operations.

"We have always aimed for a product that is the most serviceable and easy to repair. We really have considered life cycle costs and this is based on the information we have from being so heavily involved in the industry.

"We are bus people, bus operators and bus manufacturers. Each part of that link to the industry strengthens the outcomes and choices made in the design of our buses. We have done it with that original desire to build a bus with operators’ needs in mind." 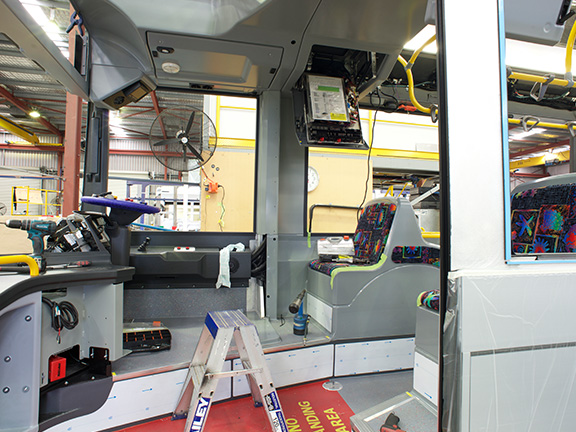 Over time, the ownership of Volgren has changed. In 2012 the Grenda Corporation sold a majority stake to Marcopolo and, more recently, the Brazilian company took full ownership. Critically, Smith says, this ownership structure has not led to a reduction in the Australian-made component of the Volgren buses.

"Marcopolo has shown a great deal of interest in and support for the aluminium structures we have in the marketplace and there is certainly no direction to change or alter the local content of what we do," he says.

The sheer size and knowledge that comes from the relationship with Marcopolo gives Volgren access to the world’s best technologies while allowing them to maintain the standards and relationships that they have spent decades establishing within Australia.

"Life cycle costs" is something Volgren mentions frequently on its website, in its advertising, and on its brochures. Smith mentions it more than once as well.

When asking him about the concept, he says that in 2016 Volgren were one of three major Australian bus body manufacturers that took part in a research study by Monash University to investigate the costs of different bus bodies on the Australian market.

The research analysed the initial purchase price, the costs of repairs and servicing, lifetime refits and fuel economy.

The Volgren-bodied bus gave an impressive lifetime saving that equated to 7.3 per cent lower costs than the other participants.

Volgren credits this figure to the technology it employs, the years of manufacturing and industry experience it has accumulated, and the aftersales service it provides.

in other buses with cracking or corrosion," Smith explains.

"It is common that buses which reach midlife and have structural problems can require rebuilds that run into tens of thousands of dollars; this is something that doesn’t happen to a Volgren bus."

"The running and fuel costs are superb, and when you do have repairs the downtime is significantly reduced because of the bus structure.

"When you combine these two factors, the results are excellent – it is the Co-Bolt system that allows us to make that claim.

"We constantly seek feedback from companies that purchase our vehicles to ensure and validate that our claims are accurate. It is the data that we get from customer feedback that fuels our design process." 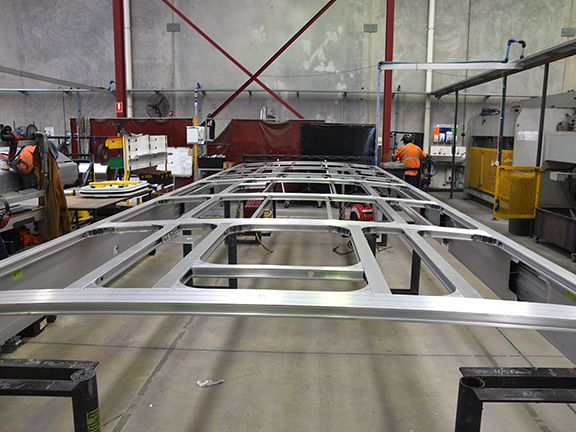 During the factory tour I saw something quite unusual: a team mood board where workers were able to, on a daily basis, place stickers to express how they were feeling.

They could let the team know if they were stressed, confident or whatever the day’s mood may have been. I asked Smith what the thought was behind this unorthodox method.

According to him, the initiative had been in place at Marcopolo for many years and was now being implemented at Volgren. But not just on the parent company’s say-so – it’s actually a program that aligns with the Australian company’s thinking.

"We have found teamwork, leadership and how you have a conversation with your workers is very important.

"We talk about having the right tools available for the job but the most important factor is this: do your workers have the confidence to do the job right the first time with what they have and how they are feeling?

"How your employees are feeling about the job can be a bigger influencer than anything else. How the team works, how the team has conversations, and how the team feel about each other is actually very, very important.

"While this importance being placed on employee feelings may seem unusual, we have found that paying attention to everyone in this way makes a huge difference. 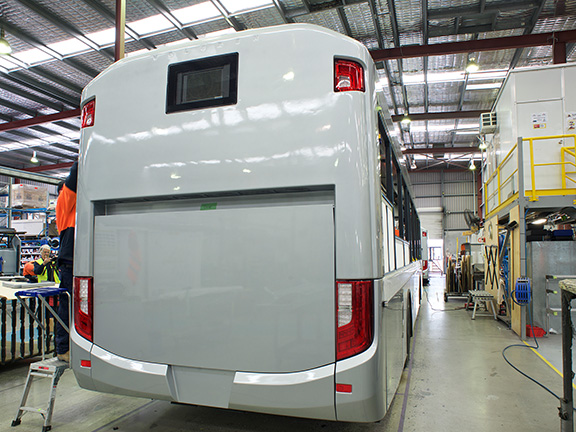 Smith talks about the gratification his team gets from producing buses of high calibre, incorporating multiple advanced features out the factory door on time every time, all while remaining focused on safety.

"We have a constantly improving safety record for the operators, which is very satisfying for Volgren. How the parts and components we use come together, the confidence we have in knowing when one of our buses goes on the road it is going to last no matter what happens to it."

"Volgren has gone through an evolution of how we build buses and we are very proud of the results.

"We think we are one of the best companies in Australia for meeting our customers’ deadlines – we set a schedule, we say what we are going to do, and we take great pride in meeting those promises."

The Australian bus manufacturing industry has been supported by operators who insist on a quality build and comprehensive, ongoing local support after delivery. That’s something that’s not likely to change anytime soon.